How to sue your Municipality for deficiency of service?

Bad Roads, no street lights, sewage overflowing, transformer issues, wires hanging, garbage menace, rodent menace or mosquito menace, lack of public lavatories and so on are some of the common civic issues faced by citizens in India. But poor infrastructure does not necessarily mean our country lacks the resources to develop the nation. Ignorance amongst people and Corruption have become a set trend leading to an ever adjusting attitude among most citizens.
India has posh cars, fast sports bikes, gadgets, some of the wealthiest businessmen in the world, shopping malls, etc which corroborates the purchasing power and per capita income of Indians. But both do not go hand-in-hand when your car is damaged at an unauthorized speed breaker or a perpetually open drainage,etc displaying lack of civic amenities. The real problem is bureaucracy, a subject the common man would not like to engage.
Recently, the arduous effort by the Government to unearth Black Money has doubled the State revenues through the Income declaration scheme 2016, the Black Money (Undisclosed Foreign Income and Assets) and Imposition of Tax Act and demonetization of Rs.500 and Rs.1000 currency notes. 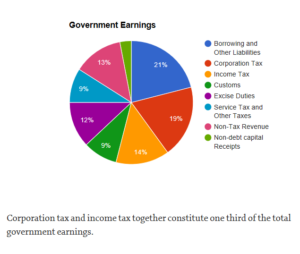 Of the total tax — Rs. 16,30,887.81 crore — collected by the central government, corporation tax has the major share, though it has declined from 39 per cent in 2009-10 to estimated 30.2 per cent in 2016-17. Corporation tax is a tax levied on the income of Companies under the Income-tax Act, 1961, On the other hand, the share of service tax has gradually increased, now contributing 14 per cent of total tax collected by the government.

Obligatory Functions of BBMP under S.58 of the KMC Act
58. Obligatory functions of the corporations.- It shall be incumbent on the corporation to make reasonable and adequate provision by any means or measures which it is lawfully competent to use or to take, for each of the following matters, namely:-
(1) erection of substantial boundary marks of such description and in such positions as shall be approved by the Government defining the limits or any alteration in the limits of the city;
(2) the watering and cleansing of all public streets and public places in the city and the removal of all sweepings therefrom;
(3) the collection, removal, treatment and disposal of sewage, offensive matter and rubbish and, the preparation of compost manure from such sewage, offensive matter and rubbish;
(4) the construction, maintenance and cleaning of drains and drainage works and of public privies, water closets, urinals and similar conveniences;
(5) the lighting of public streets, municipal markets and places of resort vested in the corporation;
(6) the maintenance of a corporation office and of all public monuments and open spaces and other property vesting in the corporation and keeping a true and correct account of all corporation property;
(7) the naming or numbering of streets and of public places vesting in the corporation and the numbering of premises;
(8) the regulation and abatement of offensive and dangerous trades or practices;
(9) the maintenance, change and regulation of places for the disposal of the dead and the provision of new places for the said purpose and disposing of unclaimed dead bodies;
(10) the construction or acquisition and maintenance of public markets and slaughter houses and the regulation of all markets and slaughter houses;
(11) the maintenance of an ambulance service and service for conveying dead bodies to crematoriums;
(12) the destruction of birds or animals causing nuisance, or of vermin and confinement or destruction of stray or ownerless dogs;
(13) laying out new public streets;
(14) maintaining or aiding schools for pre-primary education;
(15) the construction or acquisition and maintenance of cattle pounds;
(16) establishing and maintaining a system of public vaccination;
(17) the reclamation of unhealthy localities, the removal of noxious vegetation and generally the abatement of all nuisances;
(18) the planting and maintenance of trees on road sides and elsewhere;
(19) the construction, maintenance, alteration and improvement of public streets, bridges, sub-ways, culverts cause-ways and the like;
(20) the removal of obstructions and projections in or upon streets, bridges and other public places; 2[(20-A) removal of unauthorized cable including Optical Fiber Cables laid under, over, along, the across, in or upon any streets or property vested in the corporation]2
(21) the management and maintenance of all municipal water works and the construction or acquisition of new works necessary for a sufficient supply of water for public and private purposes;
(22) preventing and checking the spread of dangerous diseases;
(23) the securing or removal of dangerous buildings and places;
(24) the construction and maintenance of residential quarters for the poura-karmikas;
(25) the provision of public parks, gardens, playgrounds and recreation grounds;
(26) the regulation of lodging houses, camping grounds and rest houses in the city;
(27) establishing and maintaining compost plants for disposal of sewage;
(28) supplying, constructing and maintaining in accordance with the general system approved by the corporation, receptacles, fittings, pipes and other appliances whatsoever on or for the use of premises for receiving and conducting the sewage thereof into drains under the control of the corporation; 1[(28A)vital statistics including registration of births and deaths; (28B) regulation of tanneries.]1
(29) taking measures to meet any calamity affecting the public;
(30) fulfillment of any obligation imposed by or under this Act or any other law for the time being in force and discharge of functions in respect of any matter entrusted to the corporation by Government by notification;
(31) subject to adequate provision being made for the matters specified above, the provision of relief to destitute persons in the city in times of famine and scarcity and the establishment and maintenance of relief works in such times.

The Conundrum
When a person buys an expensive car, he pays lifetime road tax but where is the money reserved for road tax going? A law-abiding tax paying citizen is entitled to good municipality services.
The treasury chest of the Government is not empty as it portrays. The problem is that the services provided by contractors are sub-standard and without any warranties and there is no liability for negligence.
While ranting on social media, newspapers, etc regarding any issues relating to civic amenities may work, a citizen can under the prescribed laws issue a legal notice to the Municipality or any State authority which ought to have performed its duty. The aggrieved person can sue in the ordinary courts, through an action in tort and claim monetary damages from the Government. While few countries have enacted government tort liability laws, India does not have a codified tort law or public official accountability law to make officials liable for misconduct and negligence in their duties. But the general perception that public officials are exempt from any liability due to “doctrine of sovereignty” or “the King can do no wrong” is a thing of the past. The Law Commission of India has raised the need for state’s tort liability legislation. Even in N.Nagendra Rao & Co vs State Of A.P AIR 1994 SC 2663, the SC reiterated the need for a codified vicarious liability law of the State for negligence of its officers. However, we are yet to see the light of such legislation.
However, the Courts have granted relief to citizens in the past. In P. Gangadharan Pillai Vs. State of Kerala, AIR 1996 Ker. 71, the petitioner’s hotel was ransacked in a mob attack, causing damage to the property of the writ petitioner. Police had sufficient warning of the likelihood of an attack by the rioters. The State was held liable for failure to protect the petitioner’s hotel, which failure had resulted in infringement of the petitioner’s right to carry on business and trade, as contained in Article 19(1)(g) of the Constitution. The Consumer Forums have entertained complaints under S.13 of the Consumer Protection Act, 1986 against the Government Development Authorities in many instances.
Under the current, Indian legal system, an aggrieved may:-
I. Institute a civil suit
II. File a writ petition, with respect to wrongs amounting to a breach of fundamental rights, committed by or on behalf of the Government
However, filing a writ petition does not mean that the Courts would grant relief in the form of compensation.
To institute a suit against any government authority, Under S.80 of CPC, an individual can issue a 60 day notice to any government authority for the purpose of institution a suit against the Government or against a public officer with regards to any act done by such an officer in his official capacity, until the expiration of two months after the notice in writing has been delivered to public officer, or left at concerned office. That the requirement for sending a notice can be waived off in certain circumstances such as a suit to obtain an urgent or immediate relief against the Government may be instituted, with the leave of the court, without serving any notice as per S.80 of CPC. Section 482 of the KMC Act (Karnataka municipal corporation act) is synonymous to S.80 of CPC which provides the procedure to issue a legal notice to BBMP.

Contact us for Fee structure to issue a legal notice to government authorities.

Whether to defend you in a litigation or arbitration or to implement new business strategies, you need pragmatic, creative & timely advice that is backed by strong experience.

contact us
YOU ARE AWARE AND EXPRESSLY UNDERSTAND AND AGREE THAT, TO THE MAXIMUM EXTENT PERMITTED BY APPLICABLE LAW THAT WWW.BANGALORELAWYER.COM ARE NOT SEEKING TO SOLICIT ANY WORK FROM YOU AND THE INTENT OF PUBLICATION OF THIS WEBSITE IS NOT TO ADVERTISE IN ANY MANNER. THE INFORMATION PROVIDED UNDER THIS WEBSITE IS AVAILABLE TO YOU (THE USER) AT YOUR REQUEST, SOLELY FOR THE PURPOSES OF INFORMATION AND RESEARCH. THIS WEBSITE IS NOT INTENDED TO AND SHOULD NOT BE INTERPRETED AS DIRECTLY OR INDIRECTLY SOLICITING OR ADVERTISING. WWW.BANGALORELAWYER.COM SEEKS TO PROVIDE INFORMATION ON LAW AND RELATED ASPECTS AND PUBLISH ITS OWN RESEARCH, OPINION THROUGH THIS WEBSITE. By entering the website, the user expressly acknowledges having read the Disclaimer and affirms that the statements made above are accurate and true and the User has voluntarily chosen to access this website. If you do not agree with the Disclaimer above, please retract from accessing the website.
I Agree Privacy Policy